After Baarish, Mahira Sharma to collaborate with this Punjabi rock star for her next 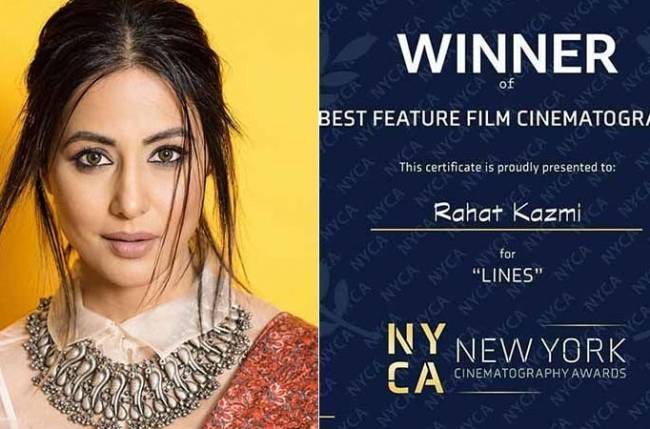 Hina Khan is one of the most popular television actresses. She is known for her performance in hit soaps such as Yeh Rishta Kya Kehlata Hai and Kasautii Zindagii Kay. After entertaining TV audience for a long time, the actress stepped into the world of cinema. And now, here’s some good news for the ardent fans of the actress.

Well, Hina’s debut film Lines has bagged ‘Best Feature Film’ trophy at New York Cinematography Awards. Hina made her Cannes debut for this film. The actress took to her Instagram feed and posted the official picture of the certificate which is in the name of the director of Lines.

Hina captioned it as, “‘Winner of Best Feature Film’ at New York Cinematography Awards. And official “Golden Eagles” Qualifier.. Some “Lines” are meant to be crossed! And as far as my first ever shot, home produced and most dear film “Lines” is concerned we are crossing borders and getting recognition at one of the most respectful platforms. We are also the qualifiers for the well known and prestigious ‘Golden Eagles Awards’ set to happen later this year. #Lines many more to come! @rockyj1 @rahatkazmi @rishi_bhutani”