Mirzya actress Saiyami Kher REVEALS she was so excited to see Mahesh Bhupathi HERE; deets inside

Congratulations: Farnaz Shetty is in LOVE!

It seems actress Saiyami Kher is a sports enthusiast and a fan of Mahesh Bhupathi’s sports skills!

And, the pretty lady, on social media, revealed that she was excited to see the ace tennis player at Wimbledon 2020.

As we all know how the coronavirus pandemic has created problems for everyone, and due to this, so far, many tournaments have got cancelled.

A day ago, Bhupathi took to social media and shared a throwback picture of himself. Alongside the click, he wrote, “Missing @wimbledon … SIGH!!!!”

To this, Kher commented, “Was so excited to go for it again” followed by a sad emoji.

Take a look below. 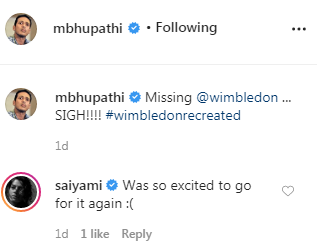 Bhupati has carved a niche for himself in the world of sports. He became the first Indian to win a Grand Slam tournament in 1997. During his days, the Padma Shri awardee won the hearts of tennis enthusiasts with his wins.

Saiyami Kher, on the other hand, is an actress who has worked in various film industries. She made her Bollywood debut opposite Harshvardhan Kapoor in Rakesh Omprakash Mehra’s Mirzya. She has also acted in Netflix’s Choked and Hotstar’s Special OPS.