This is Helly Shah’s dream role

Shilpa Shinde has a problem with Dipika’s relationship with Sreesanth 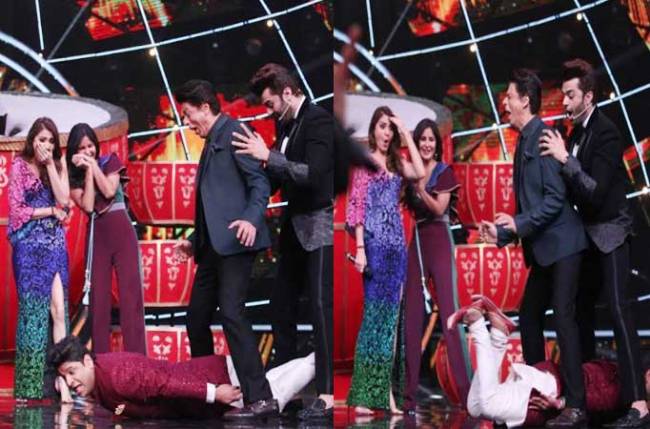 Nitin Kumar, one of the most favorite contestant of Indian Idol 10 is known for his funny gimmicks on the sets. The contestants and the host Maniesh Paul is always seen pulling his leg on his various habits be it his snoring or his dancing skills. Nitin has shown some of his best dance moves on the sets infront of the esteemed judges and the guests who grace the show. Off late, Nitin has learnt a new move which is sliding from between the legs of another person. He has been displaying this unique talent of his for a couple of times leaving the judges and the audience in splits. Last he was seen doing it when Rohit Shetty, Ranveer Singh visited the sets. And in the finale week, he shows this skill off infront of none other than the Baadshah of Bollywood.

Shahrukh Khan who had come with his co-stars Anushka Sharma and Katrina Kaif from the movie Zero. He slided right between the legs of Shahrukh Khan and Maniesh Paul. Shahrukh Khan was floored with this talent and was mind-blown.

Nitin said, “I feel to be a performer one needs to know dance along with singing and that is important to woo and entertain the audiences. So, I have been brushing up my dancing skills along with my singing and all my dance steps are my own innovation. Everyone on the sets finds it funny, and I’m happy to bring that comic element in the show along with Maniesh Bhaiya.”