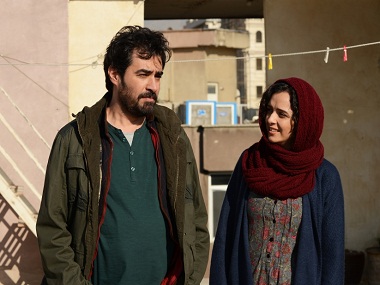 Asghar Farhadi’s most recent film, The Salesman, begins off with a noteworthy characteristic disaster — a seismic tremor that strengths a youthful couple to move out of their home and search for another one. However, what makes the film interesting is the way it demonstrates that it’s generally the seemingly insignificant details that genuinely uncover the blame lines in any relationship.

Set in white collar class Tehran, The Salesman is about Emad (Shahab Hosseini) and Rana (Taraneh Alidoosti), a couple that works in theater. While the tremor makes them move to the new home — a place that has a background marked by its own — it is an episode that happens in this new home pushes their relationship as far as possible.

No doubt about it, The Salesman is a long way from being Farhadi’s most proficient film. Not at all like his current victories — A Separation, The Past or even 2009’s About Elly — The Salesman frequently tenderly moves between sorts. For example, when Emad and Rana move into the new home, you get a feeling of premonition as they set it up — you nearly realize that something is going to happen. (Much the same as you would in, say, The Conjuring; however to a significantly lesser degree.)

Afterward, as Emad hopes to get to the base of the episode, the film practically turns into a whodunnit, with even a very advantageous plot contort tossed into makes things less demanding for him. Fundamentally, the account of the film is to a great extent driven by a genuine plot, which removes consideration from the mind boggling unfurling of human feelings that is generally Farhadi’s strong point.

In that sense, The Salesman is likewise the most open of Farhadi’s current work, since it keeps you snared in light of the plot itself. (That is likewise maybe why it now and then appears like a film with less heave than you’d anticipate from Farhadi.)

However, dig further into it, and you’ll see that the film is less about the occurrence and more about the effect that injury has on individuals and connections. There are times when the film constrains you to pick sides, in light of the fact that there are two individuals in strife; but, you’re scarcely ever ready to settle on that decision, in light of the fact that the goings-on are altogether covered in dark.

Shahab Hosseini’s Emad, specifically, truly makes things troublesome for the group of onlookers, as a result of some innate appeal — both in the performing artist and the character. However, while you end up identifying with him, you may sooner or later totally can’t help contradicting his response to different circumstances, despite the fact that from an enthusiastic viewpoint there seems, by all accounts, to be “defense” for what he says and does.

Alidoosti’s Rana is a contextual analysis in post-traumatic anxiety issue, as she responds naturally and wildly to her life being tossed out of rigging. However, when it truly comes down to settling on a decision between serving the self and serving someone else — whoever that may be — she settles on the sort of decisions that would help you to remember the splendid, sparkling center of expectation mankind so effectively figures out how to veil with regular skepticism and aloofness. The film achieves its finest in the climactic succession of the film, as it genuinely obscures the lines amongst high contrast, good and bad.

Through the film, we additionally observe the external side of the couple’s life — Emad and Rana are stage performers, who’re all the while acting in a generation of Arthur Miller’s play Death of a Salesman. Aside from shared topics that the play and the film have — essentially as far as one’s translation of and response to reality, the theater parcels likewise indicate how life some of the time constrains you to go out into the world and put on a show, regardless of how troublesome things appear within. At times, the façade breaks; however the show must go on.