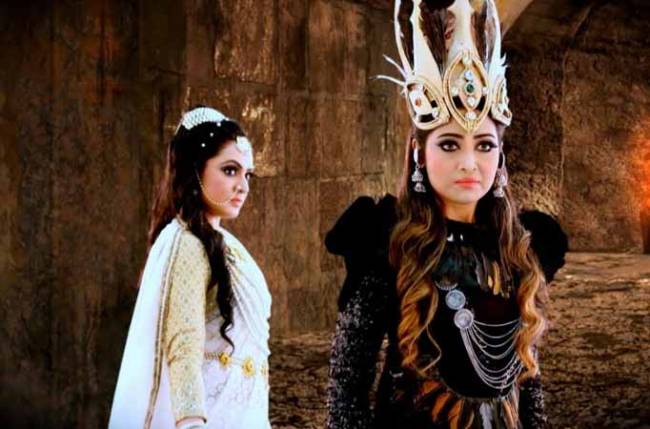 Beder Meye Jyotsna, which airs on SUN Bangla, is up for high voltage drama. With the entry of actress Sudipta Banerjee, the Bengali fantasy folklore will witness lots of twists and turns.

The makers have roped in Sudipta to play the role of Vishakha, a Vishkanya who vows to destroy the protagonists Jyotsna and Kanchan with her venom.

As per the current storyline, a devastating storm starts, Jyotsna and Kanchan are stunned. A worried Jyotsna senses something wrong as the rainstorm is abnormally bad. On the other hand, as Kamini fails to take the golden tortoise from Kanchan and Jyotsna, she devises a wicked plan to hold Kanchan-Jyotsna captive. Kamini, through her black magic, calls in Vishakha in order to finish Jyotsna and Kanchan. Vishakha answers to Kamini’s call and promises to work as per her intention. She poisons all the crops, water bodies and air too. All food gets destroyed, crops get burnt and a famine occurs in Bijoy Nagar. Compelled by Kamini’s threat, six monks enter rajsabha and say that it’s all happening because of the sin of Kanchan-Jyotsna. Jyotsna herself has created this situation using her expertise in black magic. Kamini praises Vishakha for her effort.

Speaking about her character in the show, Sudipta said in a statement, “I got a call from Surinder Films to portray the character Vishakha. I have acted in fantasy folklores earlier also. But starting from jewellery to costume to makeup everything is way different here. Vishakha is a gorgeous character and it takes almost three to four hours to get ready. This character has an important role to turn the current storyline. I am trying to give my best to depict the character believable to the audience. The entire Beder Meye Jyotsna team is very cordial and I am enjoying thoroughly with them.”