Mohit Malik and Arhaan Behll in Pearl Grey’s next? 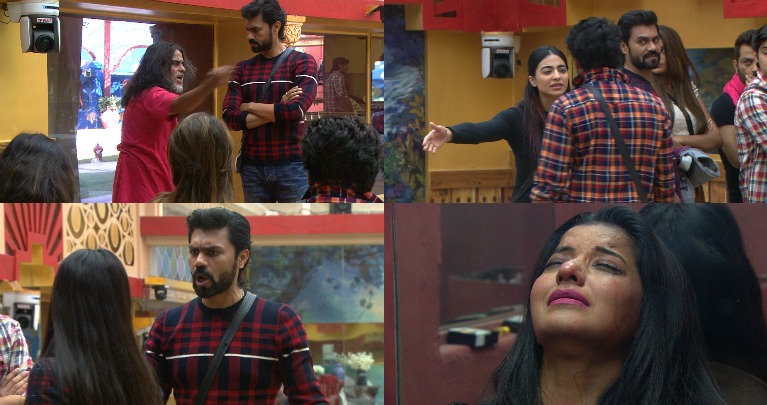 The entire house turns into a battleground as the housemates are at each other’s throats to prove their point.

Following Rahul’s unanticipated eviction, it seems that the dynamics inside the house have been greatly altered.

After the housemates wake up to the song ‘Yeh Ladki Hai Deewani’, Priyanka calls for a pool party to celebrate her birthday. While all the housemates have a good time and take a dip in the pool, Bani and Gaurav prefer to stay aloof and do the household chores.

In the beginning of the day, Mona goes through an emotional upheaval after she gets worn out clothes from her boyfriend Vikrant. She informs about it to Manu who tells her that this might be his way to communicate that he is upset with her. In distress, Mona locks herself in the luggage room and cries her heart out. Manveer tries to console her but she continues with the waterworks.

Later in the day, Gaurav tries to have a conversation with Bani and justify his stand about the nomination task. Bani tells Gaurav that he has been doing things according to his convenience and not meeting her expectations as a friend. In his defense, Gaurav tells her that he did apologize for his mistake and she needs to let bygones be bygones. At the same time, Manu is seen having a conversation with Rohan and Lopa where he tells them that Nitibha is influencing Manveer to stay in the game and does not allow him to interact with the other housemates.

On the flip side, he goes to Manveer and narrates a completely different story saying that Lopa and Rohan feel that Manveer is maintaining a distance from them because of Nitibha.

In the afternoon, Bigg Boss introduces UC browser task wherein 3 trending contestants Mona, Manveer and Rohan get to see three controversial clips about them in the UC Browser booth. While Rohan gets a motivating message from his former costar Hina Khan, Manveer comes across a shocking revelation as he is shown a clip of Bani and Gaurav questioning Mona and his relationship.

Manveer confronts Bani and tells her that it was completely immature of her to think that Mona and he were sharing an intimate moment in Manu’s absence. Mona also confronts Gaurav and tells him that she did not expect him to make such shallow comment about her and that she is extremely disappointed. Manveer also puts across the point that no one questioned Bani when she hugged Jason and slept beside him but everyone is questioning them only because they are not celebrities.

Amidst all this, Manu also gets into a massive argument with Swami after he sides Bani and rebukes him for questioning Bani’s character. Soon after, the entire house turns into a battleground as the housemates are at each other’s throats to prove their point.

As the day comes to a close, Bigg Boss asks the housemates to gather in the living area for the week’s nominations process. Lopa, being the captain of the house, gets a special power to nominate one contestant and she chooses Bani.

Following the UC Browser task, Gaurav and Bani become the prime targets of nominations as Manu, Manveer, Mona and Nitibha turn against them.