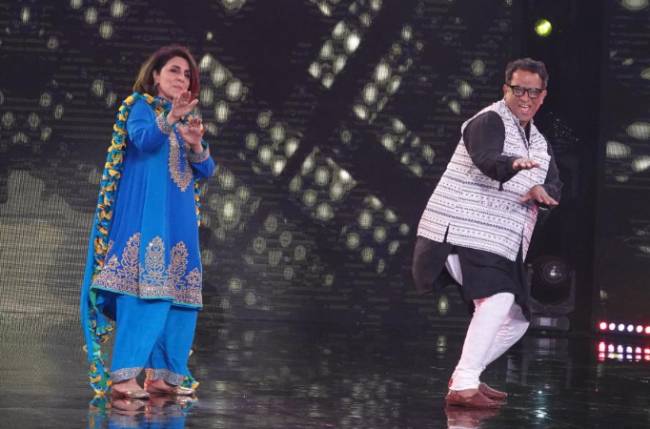 On Super Dancer – Chapter 4, Contestant Neerja and her super guru Bhawna astounded everyone, especially the guest on the show – Neetu Kapoor, this weekend. She gave the duo a standing ovation as they performed on the hit song, ‘Haye Re, Haye Re.’

Furthermore, all the other three judges praised the duo’s act and were quite keen on highlighting the growth Neerja has shown after every performance and how she overshadows her guru Bhawna at times.

Neetu Kapoor was so taken with Neerja that after the performance that she blessed her in her own special way and asked her parents to do the same after every performance. “Nazar utaarna is really important,” she remarked, adding that she performs the same for her children.

Moreover, the highlight was when Neetuji invited Anurag Basu to perform with her on one of Ranbir’s most famous songs, ‘Galti se Mistake’, from the film Jagga Jasoos (Anurag Basu directorial) as the rest of the contestants also joined them on stage, which was a delight to watch for everyone.

Anurag Basu has made it a tradition to dance with the guest judge, and how could he not this time?

Watch Neetu Kapoor and Anurag Basu dance on Super Dancer Chapter 4, this weekend, at 8:00pm only on Sony Entertainment Television.